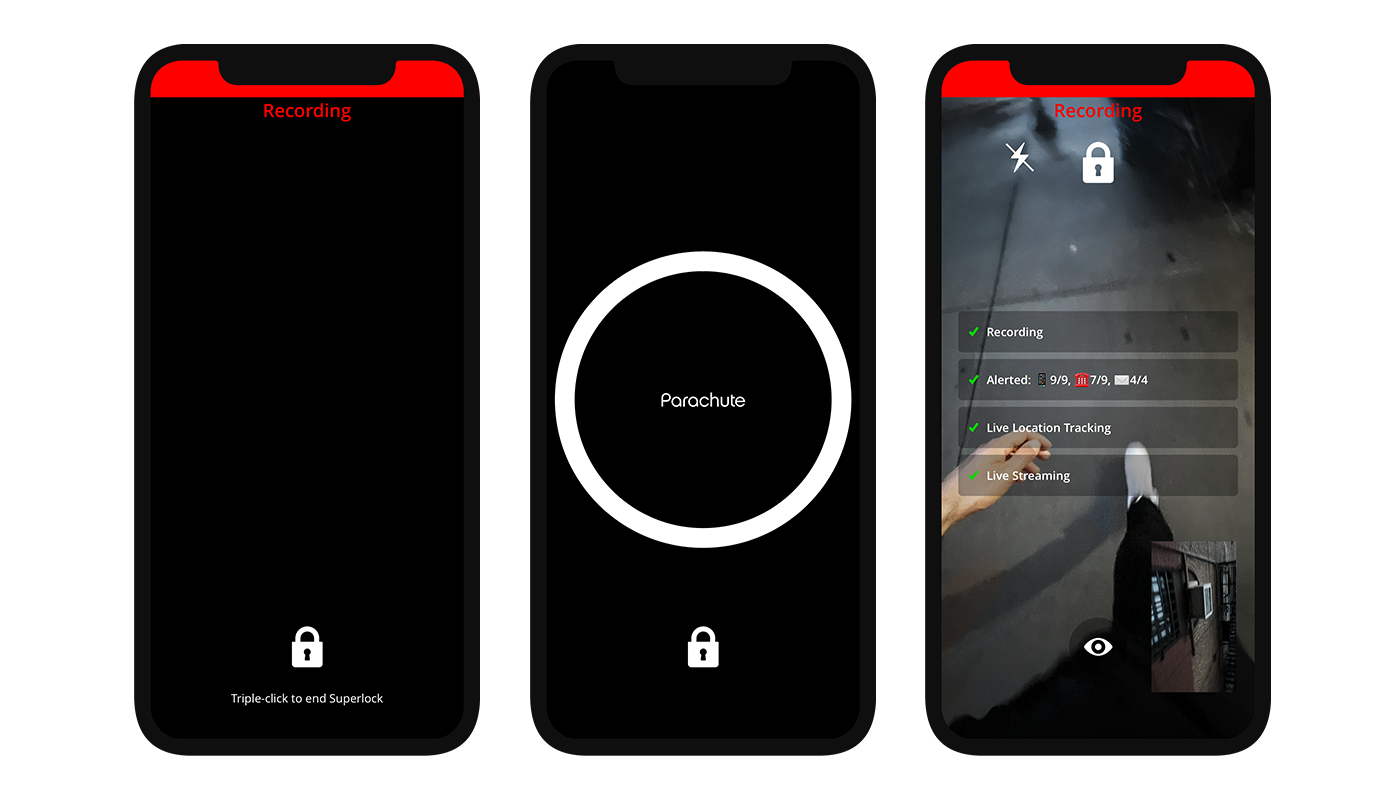 Superlock locks down Parachute during an emergency, so an unauthorized person who grabs your phone will not be able to stop the recording. Parachute is, once again, the first in the world to offer this advanced and powerful feature

Today, we are excited to introduce our latest advancement in personal safety, Superlock. We are thrilled to be the first in the world to put this technology in your hands. Superlock is a very powerful add-on that is a game-changer for people who use Parachute in situations where there is risk of their phone being taken away from them by an attacker, police officer or other unauthorized person. Superlock locks down Parachute, so someone who manages to get a hold of your phone will not be able to stop Parachute, even if they try to switch off your phone. Superlock keeps your phone locked while also continuing to record and live-stream your video, audio and location undisrupted.

Last month, we celebrated Parachute’s five-year anniversary since its viral launch in 2015. From the very first day, powerful features were put in place to safeguard you even if someone were to take your phone away from you. Parachute wipes all your evidence off your phone as it’s being live-streamed, so a sophisticated attacker who gets control of your phone will not be able to find anything, even if they force you to unlock it or manage to break into the phone. Because the evidence is immediately pushed off the phone, it’s kept safe even if the phone itself is destroyed. With multi-camera recording, Parachute records from the front and back cameras at the same time, increasing the likelihood that the front camera gets a shot of the attacker as they look at your phone.

Superlock takes Parachute’s protections against someone getting control of your phone a step further, by preventing them from stopping the Parachute incident and ending the recording.

Once you’ve set up Superlock, you put Parachute in Superlock by triple-clicking the power button during an active Parachute incident (if your phone has a home button, triple-click the home button instead). Superlock cuts off access to the “X” button that ends the incident, so the recording cannot be stopped without your secret 6-digit passcode. Superlock cuts off access to your phone’s physical buttons, so the phone cannot be turned off or switched away from Parachute. If your phone runs out of battery, crashes or experiences a hard reboot, Superlock can be set up to resume recording. You can also have Superlock cut off access to the “eye” button, which removes the ability to preview the video and see the incident status.

To stop Parachute, you must first take Parachute out of Superlock by triple-clicking the power button again (or home button) and entering your secret 6-digit passcode. An increasing time-delay mechanism is used to prevent the unauthorized person from quickly going through many combinations to try to crack the passcode. You can take Parachute in and out of Superlock as many times as you like in the course of an incident if you need to switch apps and do other things while Parachute runs in the background.

You’ll find Superlock in the Add-Ons section of Parachute’s settings. Superlock is a little more complicated to set up than our other add-ons, but we’ve tried to make the process as easy as possible with an interactive tutorial, during which you will pick your secret 6-digit passcode. The default Superlock settings are the easiest to get started, but you may want to tweak those depending on your needs. 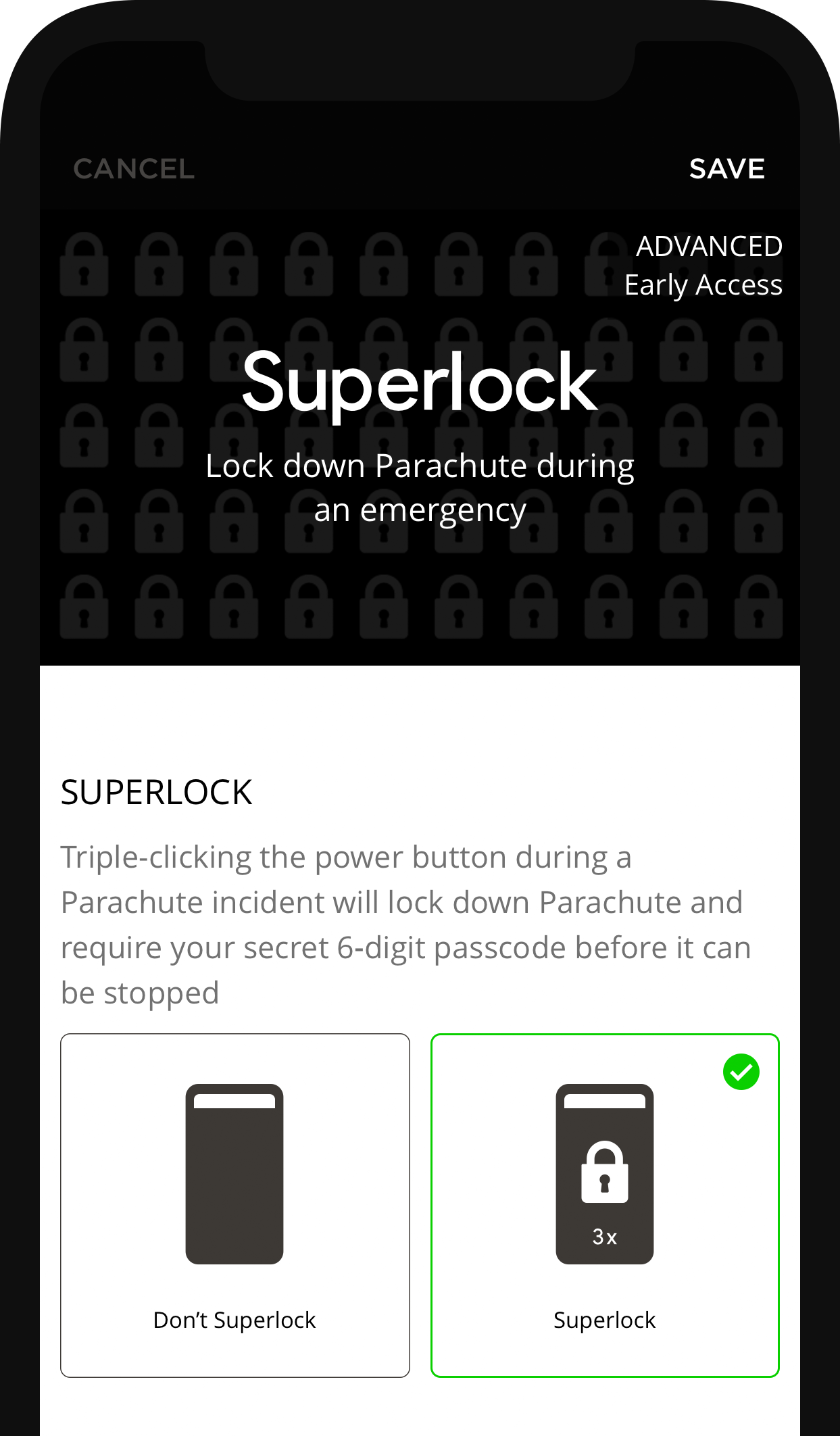 Auto-Activate. The Auto-Activate setting determines what Parachute should do if the power button (or home button) is triple-clicked while Parachute is open but without an active incident already started. Parachute can either arm itself, in which case it will be locked on the main screen awaiting activation by pressing down on the circle for 1 second as usual, or it can automatically activate itself and start a new incident. Arming is good for locking down Parachute in anticipation of an incident that may or may not happen, while auto-activating is good as a quick way to activate Parachute and put it in Superlock in one go.

Re-Activate. The Re-Activate setting determines what Superlock should do if a power failure (battery runs out), system crash or hard reboot takes place during Superlock. You can learn more about this setting and the tradeoffs involved in the Superlock FAQs.

As the most powerful safety app in the world, Parachute has become an indispensable tool for those whose life’s mission puts them face to face with danger every day. Today’s Superlock launch takes Parachute’s one-of-a-kind protection even further. We are so excited to put this in your hands and we hope it will empower you to go even further, to take an even bolder step forward, and to continue your life’s work with the confidence that you always have the backup you need. Thank you for giving us the opportunity to serve you.

Parachute would not be the same without the contributions of our members all around the world. Your voice shapes Parachute’s future and it is thanks to you that we are able to keep pushing forward. We would like to acknowledge Daniel for their assistance with Superlock.

Parachute is the most powerful safety app in the world. In the event of an emergency, it texts, calls and emails your friends and loved ones and sends them your live video, audio and location. Marinos is an engineer and the CEO of Parachute based in New York. He can be reached at marinos@parachute.live

More from the Parachute blog